First and foremost, we would like to thank you for your prayers. We feel your presence with us and it gives us courage to carry on. The past few days have been quite emotional and it has taken us some time to let our hearts come to terms with the depth of the poverty and pain we have seen. And yet, we are encouraged by the hope and dignity of spirit of those we have been encountering. 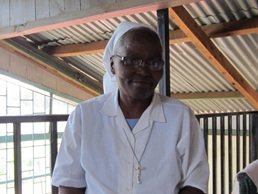 On our second day with Sr. Leah, Joseph picked us up and carried us into Kibagare slum where 17,000 people live crowded in dire poverty. Having visited here last year, the sights were more vivid, the smells more acrid and the suffering on faces more acute.St. Martin’s School, surrounded by high walls of concrete, was an oasis in the middle of mud, smoke, pollution and dirt. Sr. Leah has created a sanctuary of safety and sustenance for more than 150 children. We were there to help prepare the noon meal, serve it and visit with the children. These were wonderful tasks for us…we were able to connect with the cooks, pray with the children, and look into the eyes of each child we served. In these moments we felt hope and possibility. 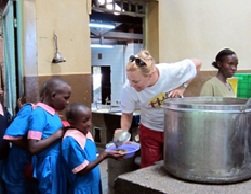 The children’s eyes were riveted to each ladle of food put into their dishes as if their hunger was deep and not easily filled. Even so they said “thank you” with soft voices. We were humbled by their gratefulness for such simple food and we savored their sweetness.

These pastoral visits between conducting retreats and workshops offer respite and are crucial for the caregivers we serve. Sr. Leah commented that her blood pressure went down when we were with her. She felt calm, connected and not alone in this very difficult work. It was wonderful to see her face transform from seriousness to laughter and enjoyment.

After leaving St. Martin’s we were shocked by a scene that will remain in our memories for years to come. We were caught in YET ANOTHER traffic jam. Traffic was slow for some distance and it was only when we reached the crest of the hill that we discovered the reason. To our horror, we saw a man sprawled out in the middle of the street. Thoughts of Gregory, from our last Update, came to us. However, we saw a river of blood flowing from this man’s head and shards of glass surrounded him. He was dead. It was apparent that he had been the victim of a hit and run accident. The police were in attendance routinely taking notes and people were nonchalantly looking on. Life here seems so cheap and death so close. It made both of us sick to our stomachs to see this up close. 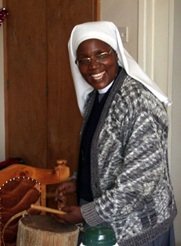 On the heels of this, we were excited to be invited today for morning tea by the Sisters of the Child Jesus from Tanzania. They live not far from the SMA house. We were welcomed socially by Sr. Theo in the traditional Tanzanian way. She dropped to one knee and offered us with outstretched hand a bowl of coffee beans to chew. After courtesies were exchanged we sat to fruit, biscuits and tea. The conversation turned to the upcoming elections. We noticed a change in their demeanor as the story began to unfold of their experiences 4 years ago. They recounted their fear as armed men broke into their home, held them hostage and sacked their house. They were afraid for their lives and as foreigners they had a right to be. We sat together in silence for a moment as all of us took in the significance of their experience. We suspect that they had not so honestly processed this experience before. This is one of the reasons we are here. It is likely they will ask us to join them in Tanzania for a retreat to do just that!! 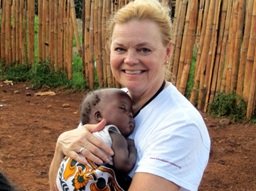 We ended our time with them in song and dance accompanied by drums and tambourine. Their relief was expressed by physical, emotional and spiritual enjoyment. We ended our visit with quiet prayer in anticipation of seeing one another again. 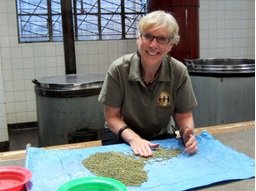 We ask you to continue to pray with us for the Kenyan people as they approach their National Election on March 4, 2013.