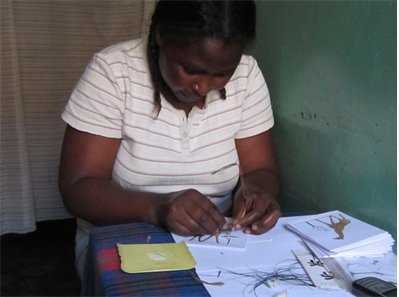 A Story of Inspiration and Courage

What a few days we have had since last we spoke. We have endured electricity outages, water shutoffs and mud swallowing up the tires of our vehicle. We are tired and inspired …let us tell you why.

Missionaries inspire in many ways. During small group sharing at our retreat with the SMA seminarians, we learned of the courage of 3 students who were on their way by bus to Tanzania for their pastoral assignment. Their story was one of courage and true compassion. Little did we know that we would have a similar opportunity just a few days later.

These 3 men saw a woman sick with severe diarrhea who was being shunned and ridiculed by everyone on the bus. They were moved by her condition and conferred among themselves as to how they might intervene. One offered her his seat near the front of the bus, another offered her his coat as she sat shivering and they all pitched in to give her pocket money to see her through the dark and cold night.

On our first outing with Sister Leah fromSt. Martin’s School in Kibagare slum, we were stuck in bumper to bumper traffic. We saw a 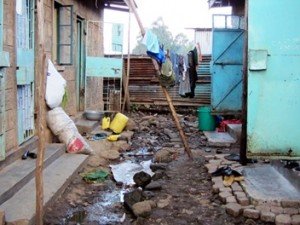 man laying half in the street and half on the sidewalk. Was he drunk? Was he in diabetic shock? It soon became obvious when we saw the frothing from his mouth that he was in serious distress. We jumped from the car, braved the traffic and went to his aid. After wiping his face and giving him water, Nicki discovered his hospital records that indicated he had a “convulsive disorder.” We surmised that he had epilepsy and needed immediate help. The consensus of the crowd, which has gathered, was that he should be put in a taxi and sent toKenyattaHospital. They offered funds along with ours to get him on his way.

It just didn’t seem safe to leave him on his own as he was quite groggy and shaken from the seizure. Sr. Leah suggested that we drive

him to the hospital, which was a good 45 minutes in the opposite direction in good traffic! His name was Gregory and his wife had 6 days ago delivered prematurely at home. He was so concerned about us and what he could offer in return for our kindness. We dropped him at the hospital because he told us that if we were seen with him, the emergency room fee would double. It was with heavy and humble hearts that we left him with money to help cover his medication. He has been in our prayers ever since.

That evening we shared the story with the 3 students who were moved to know they had influenced us. We all “high-fived” God together.

It was late in the afternoon that same day as we arrived at the home of Zera and her 5 children. They are Rwandans who had been abandoned by the husband. Her cottage industry as an artist now supports schooling for all of her children. The gentleness in her manner and the sweetness of her children touched us. The photos show the beauty of the family and the harshness of the environment they live in.

That’s all for now. We’ll send some more Updates when power resumes. 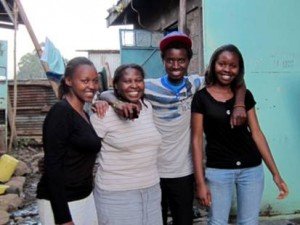 Zera with three of her five children